How do we work to collaborate and respect the multiplicity of our knowledges? How do we hold diverse voices in one space? What is the value of using art as an alternative lens to view society?

Our Taking Yourself Seriously project has been thinking about these things.  We have met again as a project team sharing the emerging developments that the three projects; the women’s poetry project, the adventure playground and the school have identified. Collaborative projects are tricky, involve difficult conversations and boundaried co-production as our blog posts have discussed before. Community and global  politics have influenced the project’s development too. We have taken the call to take ourselves seriously to heart and have taken the need to have honest, conflicted and difficult conversations to the conferences that we have attended.

We have been presenting ideas to a number of stakeholders including ARVAC. Key themes of knowledge, co-production, roles, voice and ethics that have emerged as part of the Taking Yourselves Seriously project were presented to ARVAC at their annual conference. We then led a workshop asking reflections on three questions; what does art mean to you? what does social cohesion mean to you? what approaches to social cohesion have and haven’t worked? Key reflections emerged that included successful methods for using arts methodologies in film and photography, the diversity of approaches to social cohesion and the sharing of examples of top-down government policies that had failed due to lack of community engagement. The session ended with an enthusiasm for using arts methodologies to create ‘an alternative lens’ (Eisener, 1997), as a means of developing communication that has the potential to integrate all levels of community and locality.

We have also been working with local community workers with an interest in arts methodologies. We again shared the emerging themes from our research through workshops. The first workshop was based on Maori concepts of sacred and everyday knowledge (Te Wahanga, 2011). We asked participants to consider the variety of knowledges that they held and to place them into a basket of knowledge. This workshop drew on the multiplicity of knowledges that we recognise within the Taking Yourselves Seriously project. The second workshop developed a personal map using poetry, questioning if cohesion can be built creatively and exploring personal relationships to place. The third workshop used creative arts to ask participants about their experience of using arts methodologies for social cohesion. We offered participants the opportunity to reconsider their perceptions of knowledge using creative techniques.

We were at the Co-creating Cites and Communities Conference in Bristol, hosted by the Connected Communities project, through which our Arts and Humanities Research Funded project runs. 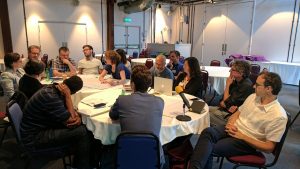 Here, we shared a real dilemma that the project was experiencing.  This was:

The area around Pitsmoor Adventure Playground had been experiencing some violent incidents involving gang violence, and the children and young people were finding it difficult. The playground is a safe space for them to play. Should its remit be widened to include becoming a community hub so that people could come there and be supported more generally?

TYS project workers briefly debated the issue and then asked for the advice and ideas to be work shopped. This approach, one of debate, dialogue and vulnerability was difficult. Not everyone felt that they could comment or offer an opinion this situation.

Taking yourselves seriously, for us, has become an opportunity to be honest about challenges, to have conflicted conversations and to share vulnerabilities.

Our emerging findings are as follows: 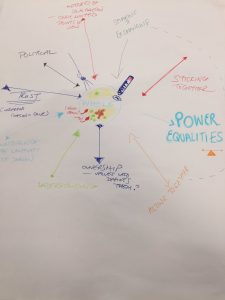 Taking Yourselves Seriously: What do We Know? Artistic methodologies to explore Muslim women’s layered experience of identity in Rotherham